The Help by Kathryn Stockett 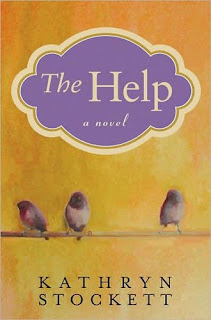 I've been a bit disappointed by the past few books I've read, but that all ended when on impulse I picked up Kathryn Stockett's 500+ page book, The Help.

This book had me regularly reading late into the night. For those unfamiliar with the book which I understand has been made into a movie that will star, Emma Stone, Viola Davis and Octavia Spencer, it takes place in Jackson, MS during the early 1960s.

For those not familiar with modern US history, it may be shocking to realize the evil that was called segregation. The story centers around a college educated, single woman in her early 20s who's returned home after getting her degree and is struggling to start her career as a journalist / writer as well as two maids who work for different white families in Jackson.

Comparisons with Lee's To Kill a Mocking Bird are easy to make. Both authors are southern woman, both address the racism that was rampant and the social injustices that seem inconceivable to us today. Unlike Lee's novel though, Stockett's story balances tension with humor and I found myself regularly laughing out loud. This may go down as my favorite book of 2011.

Looking for some summer reading? Don't be put off by the deep nature of the subject matter; this book is an absolute page turner. For those who are not of the reading variety, I've included the official movie trailer.
Posted by BosGuy
Labels: Art and Film, BosGuy, Boston Guy, Video, What'cha Reading

It was excellent. Another you'd like is: Unbroken: A World War II Story of Survival, Resilience, and Redemption by Laura Hillenbrand.

I read this a few months ago, and was mesmerized. I had a hard time putting is down, too. It's one of those rare books that simply transports you to that time and place, and you really feel the spirit of the characters.

After I read this book, I almost didn't want to read another book ever again, just so I could keep this delicious (yet somewhat disturbing) prose in my mind.

I can't wait for the film, although they'll probably butcher it like they do most books.

Never read the book, but I will watch the movie.

Fantastic book. I could not put it down.

Amazing book. Can't wait to see how it is fleshed out in the film version.