Boston Pride according to BosGuy

Email ThisBlogThis!Share to TwitterShare to FacebookShare to Pinterest
This year's theme for Boston Pride is Equality: no more no less. The official calendar for this week's festivities can be found on the Boston Pride site. However, I thought I'd share my favorite programs and the events I'll be attending.

Tuesday, June 7: PrideLights This annual event which benefits The AIDS Action Committee (AAC) was the brainchild of the PrideLights organization which merged with AAC and was their signature event of the year to bring together the local community. The program has grown in recent years and is held at Club Cafe. This year's program will be hosted by Verna Turbulence. Verna will be joined by a cavalcade of the Boston's most talented drag performers. This event is always hilarious and something I look forward to attending.

Thursday, June 9: Circus or Noche Since I'll be in Atlanta for work on Wednesday, I won't likely go out until Thursday night after returning home. I've become a fan of heading to Noche Boston for cocktails on Thursdays. The bar staff is great and the crowd is both gay and friendly. I may also work my way over to Club Cafe (again) for their Circus night, which they now host each Thursday. Pride tends to bring out people who normally stay at home and with temperatures expected to hit the low to mid 80s on Thursday - I'm hopeful there will be a large crowd at both bars.

Friday, June 10: Machine I rarely go to Machine these days, but when I lived in the Back Bay this was my go-to bar on weekdays. I'm thinking I may head over to the party at Ramrod / Machine and hang out in the front room where Gay Jim from KISS 108 will be spinning hits. Shayne Ward will be performing songs from his latest CD, Obsession. If you are not familiar with Shayne you can check out his channel on YouTube. Just note, if you want to attend this event, you need to buy tickets and there is a slight discount if you purchase these ahead of time. 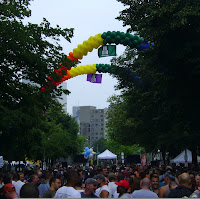 Saturday, June 11: Chandler Street Block Party (1:30 - 7:00) This event is not officially recognized by the Pride committee so all proceeds actually benefit AAC. The parade which precedes this event is so boring its filled with politicians and churches marching. There are virtually no flat bed trucks with elaborate floats so if you can only go to one event on Saturday definitely check out the block party. At night I'll probably head over to Paradise.

Sunday, June 12: Stuart Street Block Party If the weather remains nice and I'm not completely shattered from the previous parties, I'll definitely head over to this event; arguably the most interesting and best official Pride event from the Pride committee. If you've never checked this out, you should consider stopping by. The music is great and there is just something very nice about being able to mingle outside with a drink in hand. This event is generally more relaxed than the previous day's block party (people are probably still exhausted).
Posted by BosGuy
Labels: BosGuy, Boston, Boston Guy, Gay