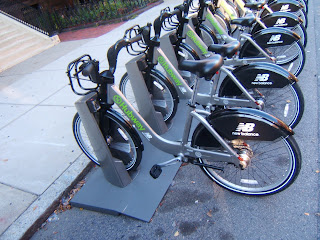 More than 2,300 subscribers have joined Boston's bike sharing program called The Hubway combining for 36,600+ station-to-station trips in its first month according to an article in the Sunday Boston Globe.

Analysts say that within 3 months, the system could see 100,000+ station-to-station trips making it one of the most successful bike sharing programs in the country. By contrast similar programs of similar size in Denver and Minneapolis took 7.5 and 6 months respectively to reach the 100,000 trips milestone.

I will admit that its hard for me to go anywhere without seeing a number of people on these bicycles in the downtown neighborhoods. I hope that its popularity continues to grow, because I think its a fantastic concept. If they open a few more bike stations near my apartment I may opt to get rid of my aging bike and join the Hubway as well.

If you find yourself coming to Boston for a visit or a day trip, you may want to consider leveraging the Hubway as a less stressful and certainly more economical choice for getting around. With daily rates for $5 and 3-day memberships for $12 you are hard pressed to find a cheaper / better alternative.
Posted by BosGuy
Labels: BosGuy, Boston, Boston Guy

I wonder who we have to talk to about getting them to install a station in the BSC parking lot.

I loved using the similar Bixi up in Montreal. It is a GREAT way to get around and I fully support and encourage bike sharing.