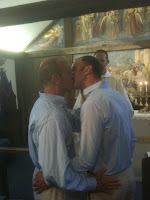 I've arrived back in Boston after spending the past four nights in Provincetown for the holiday weekend.  Since leaving, I've participated in my first gay wedding, finally developed an enviable tan, and made a few friends.
Fourth of July is one of the busiest weeks to visit Provincetown and having just returned I can understand why -- it was so much fun.  My long weekend really started on Thursday, July 1st when Sergio and I showed up to the Tea Dance at The Boatslip.  I was able to introduce Sergio to David and Sean (the couple I wrote about in my entry, Happily ever after).  The happy couple was nervous (but excited) about their pending nuptials which would take place at the Episcopal Church in the East End on Friday.  With their permission, I've posted a quick two minute video of some of the highlights of the ceremony.

Not long after their ceremony concluded Sean and David had to catch the Ptown ferry back to Boston. However, we were able to grab a quick bite then have one last cocktail at the Crown & Anchor. It was sad to say good bye after sharing such an intensely personal moment, but I do hope to stay in touch.  By the time it came to say good-bye, I was referring to them as friends - not a couple I had just met. 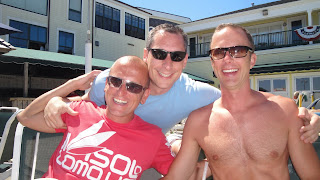 While that may have been the climax - the remainder of the weekend was hardly anti-climactic.  Friday through Sunday Sergio and I spent our days on the Boatslip's deck relaxing in the sun.  One afternoon we were invited to a pre-Tea party by a couple that we met through David and Sean who happen to live down the street from us (small world, huh?)  Shoud you be reading this - thank you Buddy and Patrick for your delicious punch cocktail and your hospitality.

We also checked out Varla Jean Merman's show, The Loose Chanteuse, which was hilarious and a nice break from the bar scene. In addition to enjoying the show we were seated next to two handsome guys visiting from NYC, Dome and Tarek.  Dome (the one in the red suit) had never been to Provincetown and like a good friend, Tarek convinced him to spend the 4th of July here.  Lucky for us that we met them at the Varla show.  The next morning we ended up sitting together at the Boatslip. 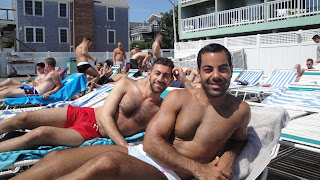 Dome has mentioned that he may be coming to Boston for schooling so we may get a chance to meet and woo him to my hometown.  It would be great to see these guys again they are handsome, friendly and articulate; that's a hat trick of desireable characteristics.

To capture some of the fun we had and show the fire works which brought nearly everyone from Cape Cod (or so it seemed) to Provincetown on July 4th, I've pulled together a roughly edited video.  Sorry its not of better quality, but I am merely a novice and still learning.

id you say this was your 1st gay weeding - that's one up on me. My partner is going to Scotland for his 1st gay wedding - in kilts - ummmmm!

Ptown looks good - it's strange but my partner was there a while aback for a wedding too - not a gay one though.

The video of Sean and David made me tear up a bit - thanks for the vid!

how awesome! congratulations to your friends! looks liek you had a great weekend!

Thanks Steve & Mo for your kind words. I'm sorry my comments reader appears to be off, but I hope to resolve this shortly.

As always, thank you for taking time to read and comment on my blog.

I think it's only fair that you show your enviable tan line...

I agree with ABI above.
I can't wait for Bear Week....we leave Portland (Oregon) on Friday for a week in P-Town!
Have you seen the P-Town Diaries documentary....you need to!

I'm so happy for you. I, too, just went to my first gay wedding.

Jealous about that Ptown weekend.

Also about your tan line. Show us!