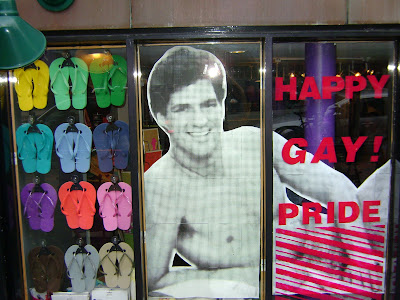 Yes, that is a photograph of MA Sen. Brown who won a special election earlier this year to fill the late Sen. Kennedy's seat, but more about that in a bit.
As I mentioned below, the block party by Fritz (or the Fritz Carlton as I like to call it) was great fun despite the fact that it was mostly overcast and often raining.  After coming home to relax a bit, I went to a friend's party (thanks Alan for being such a gracious host) and stayed longer than I would have expected.  Most of Alan and Brandon's friends I recognized from around town but did not know, which made for an interesting dynamic with the friends I brought.  I'm always surprised when you bring a group of friends out and they prefer only to talk to each other.  Their otherwise reserved nature did not prevent me from chatting with a number of really nice guys.
By 11PM the conversation seemed to turn from what people had done during the parade and block party to where to go next.  The biggest party in town was at the House of Blues - I believe the capacity is ~2,000 but against my better judgement and wishes, I was cajoled into heading to Paradise.  Heading downstairs to the main dance floor I was surprised by the newly expanded dance floor. I'm horrible at providing crowd estimates, but I would guess there was 700+ guys downstairs. I tried taking some videos which I may post later but it was just to dark for my Flip to capture anything other than the music, which incidentally was excellent. My night ended with me saying good bye to the 2-3 friends who were still out just prior to closing at 2AM.
The photo above of Senator Brown, I snapped today (Sunday) while walking around the neighborhood with my camera.  Motley Boston - which I've written about before on my blog - is the storefront that has this for all to see.  I have to admit it garners a lot of comments (at least it did while I was there snapping my picture).  Here are a couple of other displays of Pride which I forgot to include in my photos from yesterday. 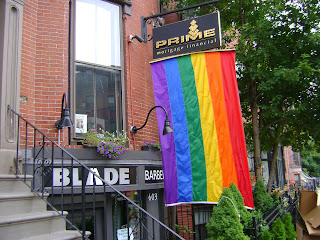 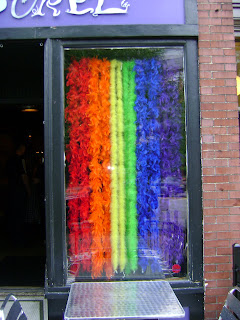 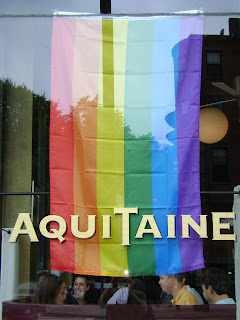 Happy Pride! I did have a smashing time! Sounds like you did too!

Love the flags being up everywhere - it's comforting!