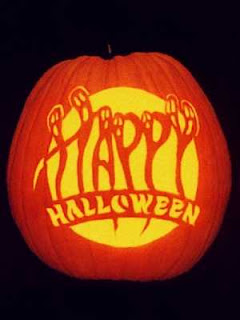 Boston is expected to be fairly mild today with temperatures in the low 60s, so I plan on skipping the gym after work to walk around the South End to see all the kids in the neighborhood (of which there are many) decked out in their costumes. When the weather cooperates (and it has plenty in the recent past), Halloween in Boston can be a real treat.
Posted by BosGuy 0 comments Links to this post
Labels: BosGuy, Boston, Boston Guy, Halloween, South End

Some of my favorite European destinations

Email ThisBlogThis!Share to TwitterShare to FacebookShare to Pinterest
In an effort to jazz up my blog, I have added this new tool (see the images below) to provide some movement and to add more photographs. I've taken a look at the html to try and figure out how to remove those annoying stars, but I have been unsuccessful so for the time being they remain.

Sadly, this list of scrolling pictures does not include photographs from past visits to great European cities like Edinburgh, Prague, Milan and Athens but for now these will do. I promise I will do my best to reconcile the problem by taking many pictures on return visits to those cities.
Posted by BosGuy 0 comments Links to this post
Labels: BosGuy, Boston Guy, Travel 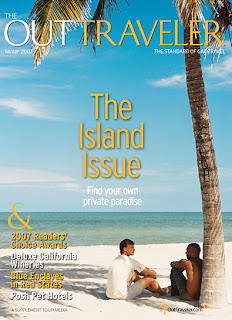 This month's OUTTRAVELER arrived in my house and the cover photo has me obsessing over my pending vacation to Brazil. I was even more surprised to see that the picture was taken by my cousin, Matt Albiani. My cousin is a successful fashion photographer who I periodically see credited in publications I read. The older we have become the less we see each other but it is still satisfying to see a family member achieve a level of success. Matt has always had an excellent artistic eye. I'm pleased he has been able to leverage that talent into a career he is passionate about.

I have to admit the entire issue is quite appealing. I consider myself a bit of a travel junkie, and I love to read about visiting exotic locations. Although Matt did not take the pictures for my favorite article "A Year of Gay Island Hopping", I think his cover picture is the most inviting in the entire issue.

Martha's Vineyard made OUTTRAVELER's top 12 list and despite it's proximity to my hometown, Boston, MA, I have never been there. Ironically I have traveled across the globe to relax on some of Phuket, Thailand's most beautiful beaches, and I have trekked to the remote island of Fernando de Noronha, Brasil in the South Atlantic Ocean. Both destinations were also featured in the article as one of 12 island destinations not to miss.

As average temperatures in Boston dip into the 50s and the days quickly shorten, I'll have to keep pictures like the one my cousin took on this month's OUTTRAVELER close at hand to keep me warm and not too depressed about the on set of winter...
Posted by BosGuy 0 comments Links to this post
Labels: BosGuy, Boston Guy, Gay, Travel

Email ThisBlogThis!Share to TwitterShare to FacebookShare to Pinterest
In my post, Celebrities, I mentioned how there has been a rash of movies being filmed in my hometown lately. A score of hollywood A-listers can be watched filming in some of Boston's swankier neighborhoods (BackBay, SouthEnd, Beacon Hill, etc...), but I neglected to mention what I hope will be a wonderful film that is already generating buzz called, Gone Baby Gone.

This week, Ben Affleck's new film, Gone Baby Gone, opened in Boston. Ben who has been out of the spotlight for a while is back in a new role as director. This being his directorial debut, I'm more than a little curious to see it. The story is based on the novel of the same name by local author Dennis Lehane. This is the same best selling author who wrote Mystic River -- notice a trend?

While I have yet to see the film, initial reviews for Ben, his brother Casey who stars in the film and the rest of the cast seem to be mostly positive. This film, like last year's detective flick, The Departed, was filmed in some of this city's grittier neighborhoods Southie and Dorchester. If you happen to see the film, please shoot me an e-mail and let me know your thoughts.

About Gone Baby Gone (As provided by Dennis Lehane's website):
The tough neighborhood of Dorchester, MA is no place for the innocent or the weak. A territory defined by hard heads and even harder luck, its streets are littered with the detritus of broken families, hearts, dreams. Now, one of its youngest is missing. Private investigators Patrick Kenzie and Angela Gennaro don't want the case. But after pleas from the child's aunt, they open an investigation that will ultimately risk everything—their relationship, their sanity, and even their lives—to find a little girl-lost.
Posted by BosGuy 1 comments Links to this post
Labels: Art and Film, BosGuy, Boston, Boston Guy

Email ThisBlogThis!Share to TwitterShare to FacebookShare to Pinterest
A friend recently sent a collection of 'stimulating' images of footballers - soccer players. It was noted by a friend that I'm lacking some visuals so I thought I would add a couple of my personal favorites from the e-mail I received over the weekend. I hope you like my selection as much as I do.

I'm a bit of a sucker for images of sexy athletes. My real weakness seems to be for soccer, hockey and baseball players and (of course) swimmers and divers. Feel welcome to continue to send me similar 'jock-shots'. I can't guarantee that I will post them, but I will certainly appreciate having them passed along. 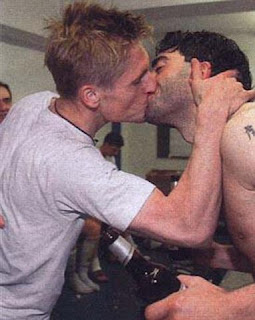 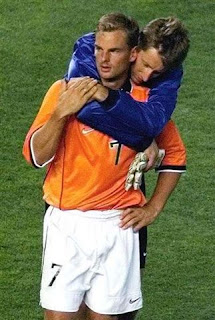 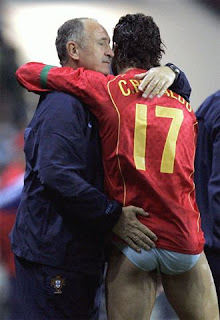 Email ThisBlogThis!Share to TwitterShare to FacebookShare to Pinterest
In the brief video clip from the Associated Press you can hear the author say that "we need to have empathy for the feelings of other people and be less judgemental." I think that pretty much sums up my feeelings on the matter as well.

Since I'm still a novice at navigating this site, I'm not sure how to add video clips to my entries... If you would like to see the clip which is 80-seconds long, link to Dear Abby Supports Gay Marriage.
Posted by BosGuy 1 comments Links to this post
Labels: BosGuy, Boston Guy, Gay, Politics

Email ThisBlogThis!Share to TwitterShare to FacebookShare to Pinterest
Celebrities in Boston

In my humble opinion, Boston is more of a large town rather than a big city. However, because it played such a prominent role in American history, politics and culture (especially in the 20th century), the city's image to those who have never visited is larger than life. Needless to say, Boston does not appear on many celebs radar screens unless they are born here and have family still in the area (e.g. Jay Leno, Matt Damon, Ben and Casey Affleck, Bridgette Moynihan, etc...) As a matter of fact in all my time living in Boston I've seen far more musicians than actors.

However, lately Boston has had more than its share of celebrity sightings. Indeed, by L.A. or NYC standards, our sightings would be considered 'cute' or 'quaint', but as compared to the recent past, there seeems to be a rash of A-list celebrities walking about town and filming here.

In the last month Kate Hudson, Alec Baldwin, Jason Biggs, and Dane Cook were in town filming scenes from their upcoming film, "Bachelor 2".

Jada Pinkett-Smith, Annette Bening, Debra Messing Candice Bergen and Meg Ryan have all been spotted ordering their double chai lattes at local Starbucks and popping into one of the many boutiques that line Newbury Street (Boston's version of Rodeo Ave) while filming "The Women".

And two personal favorites, Steve Martin and Andy Garcia have been all over the BackBay filming "Pink Panther 2".

The reason for the increased filming is two-fold, a recent tax credit given to film makers that makes it quite affordable as compared to other locations and the weak American Dollar which makes filming in Europe and other parts of the world even more cost-prohibitive. Hence filming movies like Pink Panther 2 - which is suppose to take place in Paris.

The local paper, The Boston Globe, provides a nice collection of photos from many of the celebrities listed above. To view these you can link to Celebrities in Boston.
Posted by BosGuy 1 comments Links to this post
Labels: Art and Film, BosGuy, Boston, Boston Guy, Pop Culture

The taller vertical pictures in the middle are all pictures of me while away on vacation. The first shows me sitting on the ruins of Caesar's Palace in Rome, the second is a snapshot in Schipol Airport in Amsterdam impatiently awaiting a flight, the third is at the Atlantis Resort in the Bahamas, and the final picture is of me just outside the Design Center in Buenos Aires. All exceptional cities and places I would recommend to travelers.

Try to guess the location of the smaller horizontal photos. Here is a hint...the photographs on top represent cities and places in the Northern hemisphere and the bottom row of horizontal pictures are from cities and places in the Southern hemisphere. Some of these pictures should be easy to figure out - others might prove to be more difficult to place.
Posted by BosGuy 0 comments Links to this post
Labels: Travel 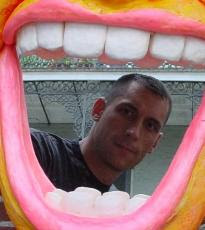 As my profile indicates, I'm a 30-something, gay male who lives in Boston, MA. I love to try new restaurants and cuisines, travel and spend time with friends and family.

I plan to record personal experiences while they remain fresh in my mind, rant about politics on occasion and obsess about all things that catch my somewhat fleeting attention. I'm not out to report news (if I do it will be with my own personal bias) or save the world. I just figured I'm too old to set up a FaceBook or MySpace account, and thought this was more my style.
I'm a happy and relatively well-adjusted guy who has a great partner, family and friends. I'm always interested in meeting other people and sharing a bit about myself.
Posted by BosGuy 0 comments Links to this post
Labels: BosGuy, Boston Guy
Newer Posts Home
Subscribe to: Posts (Atom)